Review and subs of the new pope

Posted by: admin 9 months, 2 weeks ago 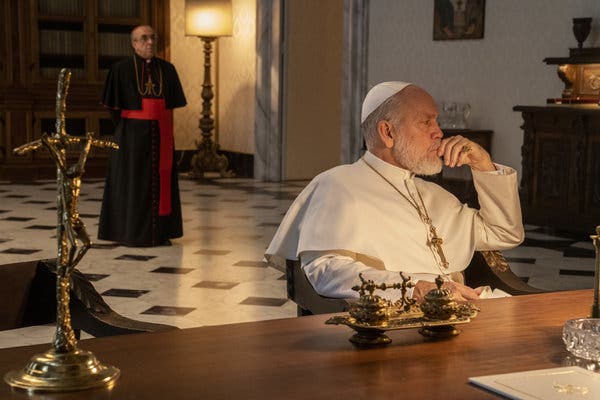 During these moments of the pandemic, great movies is a great treasure. Nevertheless the same thing for the Sorrentino movies, New Pope. Here is the review that I rephrase from the New York Times together with the list of the subtitles. Enjoy!

Among all the exotic new accouterments peak-TV has brought to our small screens, surely one of the most unexpected is Paolo Sorrentino, a certified high-art Euro-film auteur who made his American television debut with “The Young Pope” on HBO in 2017.

For that modishly hallucinatory satire on Roman Catholic themes — in which the pope was a Gen-X American whose anger over having been abandoned by his hippie parents made him swing harshly conservative — Sorrentino attracted a cosmopolitan, marquee-name cast: Jude Law, Diane Keaton, Cécile de France, Ludivine Sagnier. And in another sign of his clout, what was billed as a mini-series has been revived after a three-year gap. “The New Pope,” somewhere between a second season and a new nine-episode mini-series, begins Monday on HBO.

Most of the principal cast returns, minus Keaton (the sage nun she played was sent off to do missionary work in Africa). That includes Law, but as the title indicates, there have been some changes. The initial series ended with Pius XIII, the beautiful young pope Law embodies, collapsing just as he appeared to find his faith. (And perhaps his long-lost parents.)

“The New Pope” begins nine months later with Pius in a coma, having managed to survive a series of failed heart transplants, a continuing miracle that the Vatican hierarchy, still led by the supremely wily Cardinal Voiello (Silvio Orlando), strives to ignore. 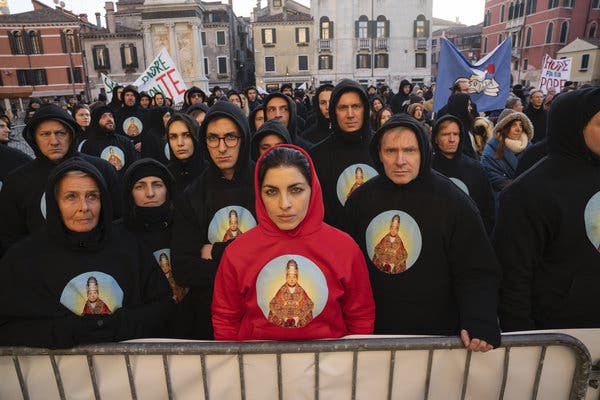 Silent groupies in Pius hoodies stand vigil outside the hospital, where the comatose pope rests in an ornate, echoing chamber, like a living work of art in a Renaissance gallery. Sorrentino wastes no time indulging his knack for soft-core irony delivered in diverting visuals: Our first sight is a naked Pius receiving a sponge bath from a trembling young nun. She gazes at the small cloth covering the papal package, then lies down while the camera pulls in on her Vermeer-like visage.

As in the earlier series, “The New Pope” glides along on a velvet raft of conversation about miracles, the sacred and the profane, the mysteries of faith, and the real-world issues that dog the church — pedophilia scandals, retrograde attitudes toward homosexuality, lousy treatment of women. For much of the new season the axis of conflict runs between Voiello and John Paul III (John Malkovich), a weary, vacillating British aristocrat and aesthete who’s a compromise choice as Pius’s successor. Later in the season the story darkens as the church faces possibly existential threats from inside and out.

Sorrentino’s real interest, though, is always in chic, seductive, mildly provocative spectacle — more Alan Ball or Ryan Murphy than Fellini — and the payoffs of “The New Pope,” whether you enjoy them or not, are mostly in the visual flourishes and conceits, often set to pointedly secular pop songs.

Opening credits play over recurring scenes of cloistered nuns shrugging off their shapeless smocks and dancing before a towering neon cross. The cardinals in their scarlet vestments are a constant design element, massed for conclaves or strung out in long files along the Vatican corridors. Small groups, meeting to strategize or argue, are arranged in Antonioni-like tableaus, seemingly transfixed by the import of what they’re seeing and hearing.

The spectacle is heavily filtered through a male gaze, which can be taken as a comment on the Vatican environment and still feel ill-considered. (Sorrentino directed and, with Umberto Contarello and Stefano Bises, wrote all the episodes.) De France, as the church’s image director, and Sagnier, as a woman closely connected to Pius, are consigned to subsidiary and often half-clothed roles. In a particularly risible conjuration of the virgin-whore paradigm, Sagnier’s Esther slides into prostitution to the sounds of “Ave Maria.”

Among the men, Law’s Pius is a silent presence through much of the season and Malkovich’s John Paul is mostly sad-eyed and mopey. Malkovich makes the ennui pretty consistently amusing, especially in a scene in which a star-struck John Paul gets to meet Sharon Stone (playing herself), complete with sophomoric “Basic Instinct” joke. But even more than in the original series, the heart of the show is Orlando’s nimble, delicate comic performance as Voiello, the scheming but soulful pragmatist who will do just about anything to protect the church — even dispose of inconvenient popes.

And the real theme of “The New Pope,” as it tracks the machinations of the small circle of cardinals and laypeople who operate behind the papal skirts, is not philosophy or God but the exercise of power. It has strong elements of workplace sitcom, but it even more closely resembles another venerable genre: the Mafia movie. Voiello and his ecclesiastical associates, bickering and maneuvering, are like the members of a crime family, making offers that maybe, with eternity in mind, you shouldn’t refuse.

The subtitle it self, if you watch in the format of DVDWebRip